Archive for the tag “Sworn in Steel”

#TuesdayBookBlog Among Thieves & Sworn in Steel by Douglas Hulick @DougHulick 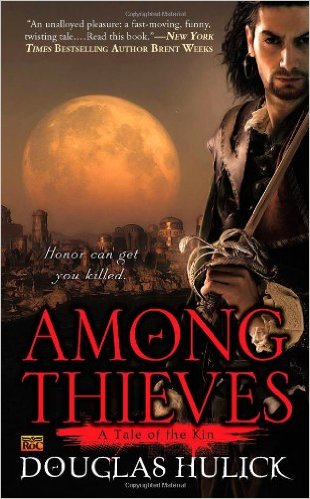 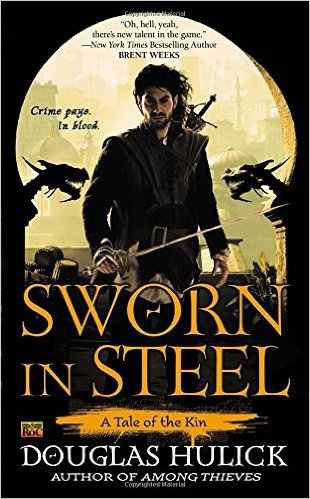 Drothe has been a member of the Kin for years, rubbing elbows with thieves and murderers in the employ of a crime lord, while smuggling relics on the side. But when an ancient book falls into his hands, Drothe finds himself in a possession of a relic capable of bringing down emperors–a relic everyone in the underworld would kill to obtain.

It’s been three months since Drothe killed a legend, burned down a portion of the imperial capital, and found himself unexpectedly elevated into the ranks of the criminal elite. As the newest Gray Prince in the underworld, he’s not only gained friends, but also rivals—and some of them aren’t bothered by his newfound title. A prince’s blood, as the saying goes, flows just as red as a beggar’s.

So when another Gray Prince is murdered and all signs point to Drothe as the hand behind the knife, he knows it’s his blood that’s in danger of being spilled. As former allies turn their backs and dark rumors begin to circulate, Drothe is approached by a man who says he can make everything right again. All he wants in exchange is a single favor.

Now Drothe finds himself traveling to the Despotate of Djan, the empire’s long-standing enemy, to search for the friend he betrayed—and the only person who can get him out of this mess. But the grains of sand are running out fast, and even if Drothe can find his friend, he may not be able to persuade him to help in time…

I’ve never made any secret of how much I love beautiful book covers. I own an overabundance of print books, filling floor-to-ceiling bookshelves in my library, even though these days, I read almost exclusively on my Kindle. (Old eyes, adjustable fonts, ’nuff said.) Bearing my nearly OCD Cover-Love in mind, it might not surprise you that the cover of Among Thieves pulled me right in, but trust me–the story inside did not disappoint. In fact, it was so engaging, I downloaded and read Book 2 of the series immediately upon finishing Book 1. And happily, I loved Sworn in Steel just as much.

As another reviewer pointed out, Drothe is exceptional among fantasy book heroes because he’s not. Exceptional. At least, not particularly so. He’s smart and scrappy, sure, but not impossibly smart or annoyingly scrappy. He has no magical powers, nor any supernatural strength to mention. What he is, is determined. Once he’s made up his mind, he’s damn hard to stop. And he’s loyal to his friend, Degan.

In fact, the friendship between Drothe and Degan is one of the things I loved most about both of these books. The sincerity of their commitment, even when it was put to the most severe of tests, left me rooting for each of them, throughout both their separate, and combined, journeys. It was a reminder that true friendship can withstand terrible hardship and trauma, and put me to mind of the bond between Scott Lynch’s Locke Lamora and his friend, Jean–but that’s a review for another day.

Hulick’s world building worked for me, with just enough political intrigue to make sense, but not so much as to slow down the plot, which, btw, is filled with action, drama, some very bad (and scary) players, and some great swordplay.

I’ve read there is to be a 3rd book in the series, but have found nothing definite as to when. I’m sincerely hoping the rumors are correct. I’d love to join Drothe and Degan on another adventure, and I highly recommend that you folks who enjoy the realm of fantasy check out the world of the Kin. I don’t think you’ll be sorry.

From the Pen of Mae Clair

Mystery and Suspense, Folklore and Legends