Archive for the tag “Mystery & Action” 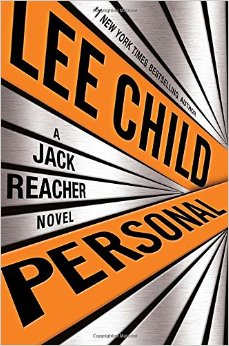 For my money, the latest Jack Reacher book, Personal,  rates a solid 5 stars. Reacher is ALWAYS a  4 or 5-star read for me, because Reacher, himself, is one of the best-drawn characters out there. Yes, I know some readers thought this book fell short, but when I read their reviews, it was almost always because of such things as Reacher not stopping often enough to discard his clothing in a dressing room somewhere, and walk out with his next outfit, designed to be worn for a few days and discarded as well. What? Yes, that’s an interesting and amusing aspect of Reacher’s nomadic lifestyle, wherein the only possession he carries with him is a folding toothbrush, but counting the number of times it happens in a given book? I don’t think so. Don’t get me wrong–I love Reacher’s quirks as much as the next person–but if you are reading these books to see how many times our indomitable hero changes his clothing, you’re missing the whole point of these stories.

For me, huge and imposing though Reacher is (and so DEFINITELY not Tom Cruise!), the most impressive thing about him is his analytical mind. Throw Jack Reacher a mystery wrapped in an enigma, tied up with yards of twisted yarn and bloody twine, and then sit back and watch as he teases out every single little thread and unravels the whole convoluted mess in a way that makes you wonder why you didn’t see it sooner, yourself. Yep…it’s all about the way his mind works–with a bit of kick-butt action thrown in for good measure. Nobody who tangles with Jack Reacher gets out unscathed, physically or mentally. Quite simply, he rules! And if it’s all more or less formulaic, who cares? It works for me every time, and as we say down here, if it ain’t broke, don’t fix it.

As for complaints that this time around, Reacher didn’t get the girl, hello? Younger than his daughter would be? I think having Reacher and Ms. Nice end up in bed would not only have been unbelievable, it would have been downright creepy, in a major “Eeew,” sort of way. Not that he isn’t a sexy man who should still get the woman on occasion, but the “girl?” I don’t think so. Happily, even Reacher knew that would be wrong.

Bottom line, Personal hits all the right notes for most Jack Reacher fans, and I enjoyed every page of it. I hope Lee Child never changes a thing about this series, and I also hope the series keeps on truckin’ for a long, long time. The world needs Jack Reacher.

If you decide to place an order with amazon, clicking through from my links will give me credit. If you are enjoying my reviews on Bookin It, it’s a great way to let me know! Thanks!

For those who never notice my Countdown widgets, the next couple of months are going to be a lot of fun for fans of several great series. And in eight days, on September 2, four new books hit at once that I’m particularly excited about, to wit: END_OF_DOCUMENT_TOKEN_TO_BE_REPLACED