Archive for the tag “Make Me”

Make Me by Lee Child 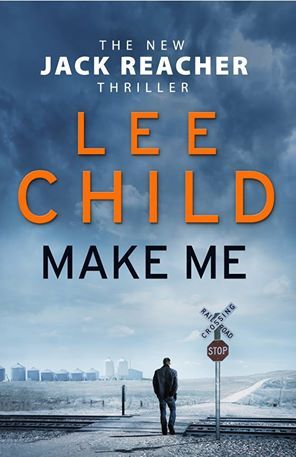 Reacher is BACK! Okay, he never left. But the last three or four books have been a bit slower than the earlier ones (not surprising after TWENTY books), and while I still enjoyed them, I wasn’t quite as excited about them as I wanted to be. However, with Make Me, Lee Child is definitely back on his game, 100%.

There is no real way to summarize a Jack Reacher story, without giving away far too much of the mystery involved, so I’m not going to try. What I am going to say is that no matter how many times I thought I knew what was really happening in the tiny little town of Mother’s Rest, I found out I was wrong. WAY wrong. All Reacher really wants to know is how the town got its name, but no one will tell him. They’re too busy trying to make him go away. Permanently, if need be. But Reacher’s general rule of thumb is, if you want me to leave before I’m ready, you’ll have to make me…an imposing task, at the very least.

Reacher doesn’t always get involved in a romance on his travels, but when he does, it’s usually pretty interesting. This one was my favorite to date, and part of me wishes he’d stay in touch with Michelle Chang for future books. But the rest of me knows that putting Reacher in a committed relationship changes all the rules. He’s been there, done that, and isn’t likely to try again.

If you are already familiar with Jack Reacher–the 6’5″, ex-MP, with hands the size of “dinner plates,” and a brain that never stops computing–you’ve probably been eagerly waiting for this one. And those of you who have never read one of these superbly done action/mysteries…well, what are you waiting for? Start at the beginning and read the whole delicious pile of them, one after the other. Reacher overload. Possibly fatal, but a good way to go. 😀