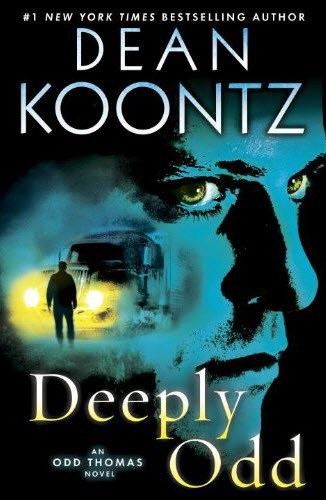 I have always enjoyed Dean Koontz more than any other writer of modern horror, bar none. In addition to his ability to scare the bejeebers out of me, he always writes with compassion, and with a great respect and love for the women in his stories. It never fails to convince me that Koontz is a man who actually understands both love and grace. The entire Odd Thomas series is a perfect example of this, and Oddie is one of the most admirable and memorable characters I’ve ever enjoyed spending time with. He’s caring, kind, thoughtful, loyal, and devastatingly funny. And he understands what it is to commit to someone with your whole heart, for all eternity, and beyond the boundaries of this world. Because of this, he is on a mission that even he, so far, doesn’t fully understand.

As readers, we are along on the mission with him, and are watching over his shoulder as he encounters evils of every sort. He’s flawed (but not nearly as much as he thinks he is), and makes mistakes (but not nearly as many as he blames himself for), and he’s often scared witless by the things he encounters. But he perseveres, regardless of where his path takes him, and it is very apparent in Deeply Odd that he will be reaching the end of his journey, soon. We will have to say goodbye to Pico Mundo’s favorite fry cook, and it will be a bittersweet parting, I’m sure. But it will be what he has been moving toward since that first wonderful and surprising book, Odd Thomas. Any reader paying even a modicum of attention to date will have a pretty good idea of where this is heading. I’m certain Koontz will throw in some unexpected twists, but I’m counting on him being sure that Oddie’s deepest dream is realized.

Deeply Odd was not my favorite book of the series, I have to admit, due in large part to there being an awful lot of rambling through the complexities of Oddie’s mind. Now, he’s an introspective guy, our remarkable fry cook, and he often has long, wandering thoughts, filled with observations both profound and hilarious. It just seemed like there were a lot more of those than usual this time around, and I felt it slowed the book down a bit. But it in no way decreased my pleasure, overall, nor my thoughts of how wonderful it would be to know someone like Odd Thomas. He touches my heart.

Reviews of Deeply Odd run the gamut from 5 stars to 1. For me, it is still a solid 4, faults and all, and much of that is due to the introduction of some new and interesting characters, and the hints of what may come in the next book, which I have heard will be the final one. I’m looking forward to it, even if it means the series is over. Oddie has traveled a long way on his journey, and it’s time for him to get his reward. The world will be a sadder place without him, but a better place for those of us who have grown to love him. If we take away a bit of who Odd Thomas is in our hearts, perhaps we will each be blessed with a little more love and grace, ourselves.

If you have been following this series, you will want to read Deeply Odd. If you haven’t, what are you waiting for? Pick up the first book, Odd Thomas, and get started!

If you decide to place an order with amazon, clicking through from my links will give me credit.  If you are enjoying  my reviews on Bookin’ It, it’s a great way to let me know!  Thanks!